Sunreef catamarans and yachts have exceptional value for money. We have several of these gems for sale showcased on this page.

“Sunreef Yachts’ success is based on the company’s dedication to the highest quality, exceptional customer service and continued innovation.

Sunreef Yachts has been successful because of their dedication to providing high-quality service and unmatched customer care. They also contribute a lot in the innovation area which helps them stay at the forefront of the industry. 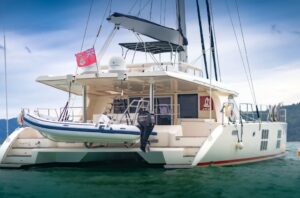 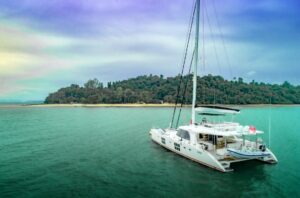 The 62-foot (18.89m) luxury sailing catamaran IN THE WIND was built by Sunreef i ...
More Info
Read more 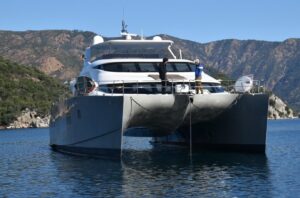 What is a Sunreef Catamaran?

A catamaran is a multi-hulled watercraft featuring two identical hulls of equivalent size. It is a geometry-stabilized craft, deriving its stability from its vast beam, instead of from a ballasted keel similar to a monohull boat. Catamarans generally have less hull volume, smaller sized displacement, and shallower draft (draught) than monohulls of equivalent length. The two hulls combined additionally typically have a smaller hydrodynamic resistance than similar monohulls, needing less propulsive power from either sails or motors. The catamaran’s larger position on the water can decrease both heeling as well as wave-induced movement, as compared to a monohull, and can provide reduced wakes.

Sunreef Yachts is the globe’s leading developer as well as supplier of high-end cruising and also power multihulls.

Each catamaran, electric motor yacht, and superyacht constructed is a bespoke development. Every luxury yacht is a vision gave birth to, attentively developed to supply luxury, style and also convenience.

The visionary as well as driving force behind the Sunreef Yachts shipyard is Francis Lapp – the firm’s Owner and Head of state.
Francis Lapp opened up a shipyard in Gdansk – a city with lengthy customs in naval construction and the most proficient labor force. With the launch of the world’s initial 74ft high-end oceangoing catamaran with a flybridge in 2003 Sunreef Private yachts began a brand-new era in the history of yachting and also triggered a change in the ideology of multihull layout.
Significant by fine workmanship as well as ingenious layout, every catamaran constructed by Sunreef Yachts is special. Every one of the engineering and creation is executed in-house, in the Gdansk shipyard.
Every detail is determined to fulfill the greatest standards. The outcome is quality you can see, really feel, and also experience.

Catamarans have 2 distinct primary efficiency attributes that differentiate them from displacement monohull vessels: reduced resistance to flow via the water and higher security (initial resistance to capsize). Picking in between a monohull as well as catamaran setup includes considerations of lugging capability, speed, and performance.

At low to moderate rates, a lightweight catamaran hull experiences resistance to flow with water that is approximately symmetrical to the square of its rate. A displacement monohull, comparative, experiences resistance that is at least the dice of its rate. This means that a catamaran would certainly need 4 times the power in order to double its speed, whereas a monohull would certainly need eight times the power to double its speed, beginning at a slow speed. For powered catamarans, this suggests smaller power plants (although 2 are generally required). For sailing catamarans, low ahead resistance enables the sails to obtain power from attached flow, their most reliable mode– analogous to a wing– bring about using wingsails in racing craft.

Catamarans depend largely on form security to stand up to heeling and also tip over. Comparison of heeling security of a rectangular-cross area monohull of beam, B, compared with 2 catamaran hulls of size B/2, separated by a range, 2 × B, determines that the catamaran has an initial resistance to heeling that is 7 times that of the monohull. Compared with a monohull, a travelling catamaran sailboat has a high first resistance to heeling and also capsize– a fifty-footer requires four times the force to start a capsize than a comparable monohull.

One measure of the trade-off in between speed as well as carrying capability is the displacement Froude number (FnV), compared to calm water transportation efficiency. FnV applies when the waterline length is too speed-dependent to be meaningful– as with a planing hull. It uses a recommendation length, the cubic origin of the volumetric variation of the hull, V, where u is the family member flow speed between the sea and also ship, and g is velocity as a result of gravity:

Tranquil water transport efficiency of a vessel is symmetrical to the full-load displacement and also the maximum calm-water rate, separated by the matching power needed.
2 breakthroughs over the typical catamaran are the small-waterplane-area twin hull (SWATH) as well as the wave-piercing configuration– the last having come to be a widely favored layout.
SWATH reduces wave-generating resistance by moving displacement volume below the waterline, making use of a set of tubular, submarine-like hulls, attached by pylons to the bridge deck with a slim waterline cross-section. The immersed hulls are minimally influenced by waves. The SWATH form was developed by Canadian Frederick G. Creed, who provided his concept in 1938 and was later awarded a British license for it in 1946. It was first made use of in the 1960s as well as 1970s as an advancement of catamaran style for usage as oceanographic research vessels or submarine rescue ships. In 1990, the United States Navy commissioned the construction of a SWATH ship to evaluate the arrangement
Wave-piercing catamarans employ a low-buoyancy bow on each hull that is sharp at the water line as well as rises aft, up to a level, to allow each hull to pierce waves, rather than flight over them. This enables greater rates via waves than for a standard catamaran. They are identified from SWATH catamarans, in that the resilient part of the hull is not tubular. The extending bridge deck might be configured with some of the qualities of a typical V-hull, which permits it to permeate the crests of waves.

About the Sunreef Yachts founder

Francis Lapp is the visionary behind Sunreef Yachts, a catamaran that is known for its value for money, and immersive sailing experience. He oversees all aspects of the business from construction and engineering to marketing and sales

Francis has been obsessed with sailing from a very young age. He won several titles in France and Italy before honing his skills in constructing the world’s first luxury catamaran. As a result of his experience, he is now able to offer constructive, expert advice to sailors both young and old.

Francis is a hands-on CEO who is actively involved in the day-to-day operations of the company. He is always at his desk, constantly looking over data and interpersonal meetings to ensure that he has an understanding of how each department functions.

Sunreef is a yacht building contractor that has several catamarans to buy on Sea Independent, including new vessels and also used catamarans.
This home builder uses boat hull types consisting of catamaran as well as various other that are usually made use of for standard, time-honored on-the-water tasks such as overnight cruising, day cruising, cruising and also watersports. Sunreef equips versions listed with inboard as well as inboard/outboard drive power alternatives, available with diesel, electrical, gas as well as other propulsion systems.
Commonly appreciated and relied upon for their Sail Catamarans, Power Catamarans, Motor Yachts, Cruisers and Huge Luxury Yachts, the Sunreef watercrafts provided normally have a larger draft and also remarkably broad beam, top qualities that make them prominent and also excellent for overnight cruising, day cruising, sailing as well as watersports.
Sunreef boats up for sale on Sea Independent are readily available for a range of prices from EUR 400k on the reasonably lower-priced versions, with costs completely approximately EUR 29M for the a lot more expensive private yachts.
Some of the best-known Sunreef designs currently listed consist of: 60, 60 Power, 70, 80 Power and 60 LOFT SPACE. Numerous Sunreef designs are presently sold by specialized luxury yacht brokers, suppliers and brokerage firms on YachtWorld, with listings varying from 2005 year versions approximately 2024.

The invention of Catamarans

Catamarans were developed by the Austronesian individuals which enabled their expansion to the islands of the Indian and also Pacific Oceans.
Catamarans range in dimension from tiny cruising or rowing vessels to big naval ships and also roll-on/roll-off vehicle ferryboats. The framework attaching a catamaran’s two hulls varies from an easy framework strung with webbing to sustain the team to a linking superstructure including extensive cabin and/or freight space.

The word ‘catamaran’ is stemmed from the Tamil word, kattumaram, which means ‘logs bound with each other’ and is a type of single-hulled raft made of three to seven tree trunks lashed together. The term has progressed in English use to describe double-hulled vessels.

Catamaran-type vessels were a very early innovation of the Austronesian peoples. Early scientists like Heine-Geldern (1932) and also Hornell (1943) as soon as believed that catamarans evolved from outrigger canoes, yet modern authors specializing in Austronesian societies like Doran (1981) and Mahdi (1988) now believe it to be the opposite.

2 canoes bound with each other created directly from marginal plethora modern technologies of 2 logs tied together. Over time, the double-hulled canoe form became the uneven dual canoe, where one hull is smaller sized than the other. Eventually the smaller hull ended up being the model outrigger, giving way to the solitary outrigger canoe, then to the reversible solitary outrigger canoe. Lastly, the single outrigger types developed into the double outrigger canoe (or trimarans).
This would certainly also describe why older Austronesian populations in Island Southeast Asia often tend to prefer double outrigger canoes, as it maintains the watercrafts steady when adding. Yet they still have tiny regions where catamarans and also single-outrigger canoes are still utilized. On the other hand, more distant outlying offspring populaces in Oceania, Madagascar, and the Comoros, retained the double-hull and the single outrigger canoe types, however the modern technology for double outriggers never ever reached them (although it exists in western Melanesia). To handle the trouble of the instability of the watercraft when the outrigger deals with leeward when tacking, they rather established the shunting method in cruising, in conjunction with reversible single-outriggers.

In spite of their being the a lot more “primitive kind” of outrigger canoes, they were however efficient, allowing seafaring Polynesians to voyage to distant Pacific islands.

The benefits of a Sunreef Yachts Eco catamaran

The Sunreef Yachts Eco harvest power from the sunlight a lot more efficiently than most solar catamarans. In-house designed and made by the shipyard, Sunreef Yachts’ photovoltaic panels are fully-integrated with the composite bodywork, vastly boosting the quantity of solar energy generated. But there are extra advantages:
– The Sunreef Yachts Eco electrical luxury yachts feature advanced electric engines providing energy effectiveness, low-maintenance as well as ultra-silent procedure.
– Sunreef Yachts Eco catamarans harness, store and use clean power with environment-friendly technologies that need little to no upkeep.
– Experience developer appearances and also ecological sustainability along with unlimited options for modification.
– Bringing high-end and sustainability together, this unique range of catamarans makes use of the finest environment-friendly materials and elements.

Two-time Solution One World Champion Fernando Alonso appointed a personalized 60 Sunreef Power Eco catamaran with Sunreef Yachts. This self-dependent solar-electric superyacht is developed for travelling in complete harmony with the components. He will experience a brand-new definition of living mixed-up.